Halloween is celebrated on October 31 in communities across America with both fun and fright-filled festivities. This holiday has deep historical roots dating back centuries and is connected with more solemn observances in Christian churches in every part of the world.

The most well-known origins of Halloween are the Celtic festivals that took place in parts of Ireland and Scotland centuries ago. When the harvest was complete and the cattle were brought in from their summer grazing, it was a magical time as the boundary between the living and the dead could be easily navigated. The Celts built bonfires to protect themselves from evil spirits and they placed gifts of traditional foods outside their homes in hopes of placating the spirits and being blessed with another year of prosperity.

To make light of their own fears, people began to dress up as evil spirits in order to partake in baked goods and sweets. This evolved into “trick-or-treating” and became popular in the United States in the late 19th century.

“Day of the Dead originated several thousand years ago with the Aztec, Toltec, and other Nahua people, who considered mourning the dead disrespectful. For these pre-Hispanic cultures, death was a natural phase in life’s long continuum. The dead were still members of the community, kept alive in memory and spirit—and during Día de los Muertos, they temporarily returned to Earth”www.nationalgeographic.com

The word “hallow” actually means “holy” or “saint.” In more modern times, Halloween (or “All Hallows Eve”) became the beginning of the three-day observance that includes All Saint’s Day on November 1 and All Soul’s Day on November 2.

With Christianity’s long history of persecution and martyrdom, by the ninth century there were so many individuals that had died for their faith that they couldn’t all have their own day to be honored. As a result, “All Saint’s Day” was placed on the liturgical calendar.

Christians believe that each person has a soul or spirit that leaves their body after death and travels to heaven, hell, or to an intermediate place known as purgatory. They pray that the dead are resting in peace and they hope that their prayers might aid a loved one whose spirit is “stuck” to ascend to a higher dimension. 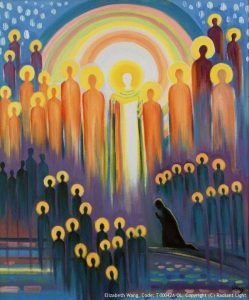 All Saint’s Day is on November 1 and is considered a Holy Day of Obligation in many Catholic churches. Christians attend mass and place wreaths at the graves of the deceased. They pray for the saints that lived and died centuries ago, as well as the selfless people in their own lives that influenced them to seek and find God.

All Soul’s Day is on November 2. Christians pray for all of the faithfully departed and especially for those in purgatory, that their souls may be purified so they could ascend to heaven and rest in peace.