The United Nations is at work within 193 countries, promoting economic development and encouraging peaceful means of resolving conflict in order to protect human rights and quality of life in every part of the world

In the 1800’s the first of the Geneva Conventions established a set of international laws that would take effect during wartime, addressing matters such as the humane treatment of prisoners of war and the protection of unarmed civilians. 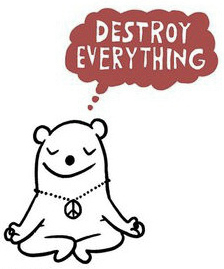 At the end of WWI, the League of Nations was created in an attempt to unite peaceful countries and to disarm stockpiles of weapons that were becoming increasingly dangerous. In the late 1930’s though, Germany, Japan, and Italy withdrew from the League, and these “Axis” countries gained power in Europe, extending their influence to the North American continent in 1941 with the attack on Pearl Harbor. The League of Nations dissolved after being unable to prevent a second world war.

The use of nuclear weapons after WWII proved that the devastating effects of war in the twentieth century would only get worse. Talks about an international peace organization resumed. The United Nations was formed in 1945, not only to prevent future wars but to maintain international law in the interest of protecting standards of living around the world.

Structure: Each of the 193 member-states is equally represented in the General Assembly with one vote each. A President is elected to a one-year term from one of five regions of the world: Africa, Asia, Eastern Europe, Latin America/Caribbean, and Western Europe.

Convenes: The GA convenes each year on the third Tuesday in September at the UN Headquarters in NYC. A regular session lasts from September to December, reconvening in January and commencing when all matters have been voted on.

A gathering of the Assembly can be requested by the Security Council or a majority of member-states in the event of urgent matters that require a General Assembly vote.

Purpose: Detailed in Chapter IV of the UN Charter.

The General Assembly is the branch of the UN where member-states debate and vote on resolutions brought before it regarding matters of peace and security. Decisions regarding peace-keeping efforts as well as UN budget and policy issues require a two-thirds vote of the Council to pass a resolution. Member-states and other agencies within the UN, such as the Security Council, regularly place draft resolutions before the Assembly for a vote. Bureaucratically, the General Assembly is structured by various committees, commissions, boards, and working groups tasked with determining it’s order of business.

General Assembly recommendations can’t be legally enforced but, despite being “non-binding,” resolutions have political weight, and a member-state’s compliance demonstrates their willingness to resolve differences peacefully according to UN policies. A recommendation with the weight of the GA behind it is often enough to resolve a conflict. If not, the General Assembly could escalate a matter to the Security Council, whose resolutions are enforceable.

Urgent matters of impending conflict are voted on within the Security Council, resulting in recommendations that are enforcable by UN Peacekeeping troops

Structure: There are fifteen members on the Security Council – five standing members, the U.S., Russia, China, France, and the U.K., and ten non-permanent members elected by the General Assembly for a two-year term. Each member has one vote. The presidency of the Security Council cycles through an alphabetical list, and each member serves a one-month term.

Purpose: Found in Chapter V of the UN Charter.

The Security Council is responsible for enforcing peace and security around the world. When a conflict arises, member-states are encouraged to first resolve their disagreements peacefully, with negotiation, mediation, or through legal means. If they unable to, and it’s determined that the conflict could either escalate or affect the peace of other countries in the region, then the dispute is brought before the council. Evidence from both parties is presented and a majority vote of nine members of the council, including a unanimous ruling from the five permanent members, results in a binding resolution that each member-state agrees to accept without further dispute.

If a member-state refuses to implement the Security Council’s recommendations, the UN could send special envoys to the region to continue the mediation process. They might impose economic sanctions or travel restrictions. Finally, they could use military force by sending UN Peacekeepers to the region to confront hostilities.

Structure: The fifty-four members of the Economic and Social Council each serve a three-year term following yearly elections in the General Assembly replacing one-third of it’s members at a time. The UN organizes member-states into five global divisions: Africa, Asia, Eastern Europe, Latin America/Caribbean, and Western Europe, and the number of seats on the council varies according to population. As in the General Assembly, the President of the ECOSOC is elected to serve a one-year term.

Convenes: Smaller sessions and various group meetings take place throughout the year and the regular month-long session takes place in July. In April, members of the Economic and Social Council meet with finance ministers from institutions such as the World Bank, the International Monetary Fund, and the World Trade Organization to review the state of the global economy as it affects the member-states of the UN.

Purpose: The role of the Economic and Social Council is found in Chapter X of the UN Charter.

The function of the ECOSOC is to maintain and improve standards of living around the world. Members of the council regularly meet with business leaders, academics, and government officials to implement solutions that improve the quality of life within member-states around the world, focusing on economic needs, cultural influences, education, and health care.

The council coordinates the efforts of numerous commissions and sub-committees. Economic commissions are assigned to each of the five regions of the world and report to the ECOSOC when a vote is needed or when a matter should be brought to the attention of the Security Council.

The Secretariat is the administrative branch of the UN. The Secretary General is elected to a five-year term

Structure: The Secretariat includes the office of the Secretary-General and about 44,000 UN employees around the world working within a complex array of departments and oversight commissions. The Secretary-General is elected by the General Assembly on recommendation from the Security Council. Presently in office is Antonio Guterres from Lisbon, Portugal, elected in 2017.

Purpose: The role of the Secretariat is outlined in Chapter XV of the UN Charter.

Employees within the Secretariat are responsible for the administrative functions that support each of the other branches of the UN. They’re tasked with providing global access to all treaties and international agreements at the UN. They organize international conferences and ensure that each member-state has interpreters to translate live events as well as access to written reports and documentation.

The Secretary-General’s role within the UN is encompassing. He has a rigorous travel schedule and regularly receives foreign dignitaries at the UN headquarters in New York City. He monitors the progress of peacekeeping missions around the world and assists in efforts of diplomacy whenever necessary. The Secretary-General attends sessions of the General Assembly, the Security Council, and the Economic and Social Council. He is responsible for collecting the billions of dollars paid to the UN through member-state’s fees, and his office provides a budget report to the General Assembly each year.

The International Court of Justice is the UN’s judiciary branch. The Court interprets laws and resolves legal disputes

Structure: There are 15 seats on the International Court of Justice and judges are elected through a majority vote of both General Assembly and Security Council members. Five judges are either elected or re-elected every three years to a nine year term. The Court is located in the Netherlands at the Peace Palace in The Hague. They’re the one branch of the UN not headquartered in New York City.

The International Court of Justice is the “judicial branch” of the UN. Their role is to settle legal disputes between member-states and to provide opinions at the request of the other branches of the UN or one of the many specialized agencies reporting to those councils. Decisions of the ICJ are binding, and instances of non-compliance are enforced by the Security Council.

On the East River in Manhattan, the United Nations Plaza is centered on 17 acres of land bordered by First Avenue to the west, East 42nd Street to the south, East 48th Street to the North, and the river to the east. The land and buildings contained on it are considered “extraterritorial” and under the jurisdiction of the United Nations according to a treaty signed with the U.S. Government.

Built in 1950, the buildings on the UN Plaza have been under renovation. The original structures were preserved and modernized by cleaning up dangerous asbestos and replacing antiquated heating/cooling systems with energy efficient ones.

The largest building on the plaza is the 39 story glass-sided tower facing the East River. During renovations, the windows were replaced with energy-efficient glass to lower heating, cooling, and lighting costs. Within it is the Secretariat branch with the newly refurbished offices of the Secretary-General, numerous diplomatic officials, and thousands of employees working for various UN agencies.

The building north of the tower contains the General Assembly Hall, the largest room in the complex. Well known from televised events, the hall features a green marble desk where dignitaries are welcomed to address the assembly. From June-November of 2013, the furniture from the hall was removed to be reconditioned and installed back in place. The assembly hall features glass booths along the walls where interpreters translate the events of the day.

Next is the conference building that houses the Security Council chambers. Decorated by designer Arnstein Arneberg, the room features a carefully restored mural of a rising phoenix on the east wall painted by Norwegian painter, Per Krogh. Desks are arranged in a horseshoe shape, and rows of chairs provide plenty of room for observers. In the same building, the Economic and Social Council chambers designed in 1947 by Swedish architect Sven Markelius received new backdrop curtains.

The Dag Hammarskjold Library is located on the south side of the plaza, and lining the East Avenue Parkway are the flags of the 193 member-states, in alphabetical order, as well as the flag of the United Nations.