About 4.5 billion years ago, the Sun formed the way trillions of other stars began, within a nebula of dust, radiation, and charged particles, possibly energized by a nearby supernova explosion. Gravity within the spinning mass of particles caused pressure in the center to reach a critical point where it collapsed inward as hydrogen atoms began to fuse into helium, giving off heat and light. With the start of thermonuclear fusion, the sun began to shine.

Dust, ice, and debris continued to orbit the new sun, colliding to form larger and larger objects that would then have sufficient mass to pull matter into a gravitational field, growing to planetary size. This process of accretion is how the earth was formed. Then, as thermonuclear fusion in the core of the sun stabilized, the solar winds blasted outward from the sun’s corona, burning away gaseous nebulae and leaving only the planets and moons, belts of orbiting asteroids, and distant regions of icy comets. (image: nasa.gov)

The Sun, like most other stars, is three parts hydrogen to one part helium and other elements. Its diameter is about 109 times the width of the earth. The distance of the sun from the Earth is 93,000,000 miles (150,000,000 km) and represents a scientific unit of measure, the astronomical unit.

Though it spins east to west at a 7.25-degree axial tilt, the sun is much different from either a terrestrial planet or gas giant since it’s plasma composition more closely resembles molten metal. As a result, it rotates faster at the equator than at it’s north or south poles. This phenomenon was observed as far back as the seventeenth century when astronomers used telescopes to carefully study the movement of sunspots on the plasma surface.

The sun is burning white-hot despite appearing yellow as it’s light filters through the earth’s atmosphere. Scientists categorize the sun as a yellow “dwarf” G-spectral type star 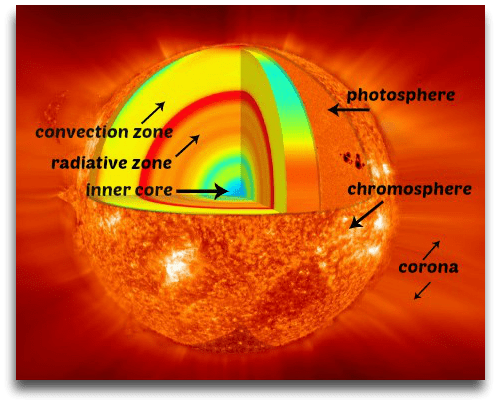 About 25% of the sun’s volume is its core where hydrogen atoms are fused into helium, resulting in a dense, hot sphere of plasma burning at about 15,000,000 K. The gamma rays created during the fusion process slowly push their way through the dense radiative zone, and in doing so they’re converted into photons of light.

As the light-energy arrives at the edge of the radiative zone, thermal cells low in the convective layer absorb their heat and begin to rise quickly on convective currents. These cells travel outward on thermal columns that break through to the surface of the sun.

The heat and light being emitted from the sun’s surface into the solar atmosphere comprises the photosphere. Within this outer layer, the gaseous composition of non-ionized hydrogen and helium has a much lower density than the sun’s plasma layers. Light from the photosphere reaches the earth in approximately eight minutes, and this rapid release of energy from the thermal cells of the convective layer is what causes the surface of the sun to appear to boil.

The kilometers above the photosphere contains the chromosphere. The chromosphere is characterized by an increase in temperature as it extends away from the sun. At it’s lower boundaries, it begins to cool from the 6,000 K of the photosphere down to about 3,500 K before heating up to 25,000 K at its outer edge.

The sun’s corona is the region outside of the chromosphere where temperatures can be as high as 1,000,000 K. Scientists seem to attribute this temperature variation to the sudden ionization of hydrogen and helium atoms in this outer sphere, possibly caused by electromagnetic bursts, such as coronal loops, blasting outward in the form of dangerous solar radiation.

The solar winds extend outward from the corona of the sun in every direction, creating the heliosphere that envelops the solar system. The pressure within the heliosphere decreases with distance from the sun and eventually starts to equalize with that of the interstellar medium of the galaxy.

The two Voyager spacecraft were launched in 1977 with the objective to fly past Jupiter and Saturn and, if possible, to continue on to explore Neptune and Uranus as well. Those goals were reached in the late 1980’s and NASA has again re-tasked the mission, sending the spacecraft to the outer boundaries of the solar system.

Voyager 1 has passed through the heliopause and into interstellar space with Voyager 2 right behind it. Both spacecraft are communicating information through NASA’s Deep Space Network and should continue to function until about 2025 when the nuclear material powering the spacecraft is depleted.

In about 5 1/2 billion years, the sun will begin to run low on hydrogen. Because of its current mass and luminosity, scientists predict that it won’t explode into a giant supernova that gives rise to a new star field, nor will it implode into a massive black hole. Instead, the sun will slowly become hotter and a deeper orange-red, expanding to engulf the terrestrial planets, including the earth.

The red giant phase will last for another billion or so years, at which time the matter in its outer layers will evaporate into space, leaving a planetary nebula characterized by hot, colorful gases streaming outward from a luminous core. The last phase is that of a white dwarf star. White dwarfs are small and massively hot star remnants that are slowly cooling down. Though scientists theorize that about 95% of the stars in the universe will slowly become white dwarfs, they can’t know for sure because stars transition so slowly and the universe itself is “only” 13-14 billion years old.