The Judicial Branch governs the constitutionality of the laws created by Congress and provides the legal means to challenge the way the laws are enforced. The U.S. Constitution provides for a Supreme Court and a system of lower federal courts established by Congress.

The Judiciary Act of 1789 began that process, and through the years the federal court system has evolved to include:

Instead of campaigning for votes on Election Day, federal judges and Supreme Court justices are nominated by the president, approved by the Senate, and they serve lifetime appointments

The federal district courts rule on civil cases between individuals or organizations from different states or on matters concerning the Constitution. Criminal cases are tried before a federal judge when charges are being brought by the United States government or when the dispute is regarding the constitutionality of a law. There are 89 courts among the 50 states, one in DC, and one in each of the four U.S. territories.

The format is a trial setting, with a plaintiff and a defendant presenting arguments before a judge and jury. If the court’s ruling is disagreed with, an appeal can be made to one of 13 appellate courts.

The United States Courts of Appeals (“circuit courts”) review every decision brought before it on appeal from the district courts.

The Supreme Court hears a limited number of cases each year, so the decisions from the appellate courts are a final ruling for most of the disputes in the U.S. involving federal law

There are thirteen circuit courts; eleven placed among populous regions within the states, one in DC, and one with jurisdiction over a “federal district.”

The process of reviewing a case on appeal doesn’t happen in a courtroom setting with a jury. Instead, a panel of judges carefully considers documents and transcripts from the lower court proceedings to decide whether the law was applied correctly. If they determine that critical errors were made, the lower court’s decision could be reversed, or the case could be remanded back to the district court for a new trial or to make changes recommended by the appellate judges.

When the President nominates a judge to the Supreme Court, he often chooses a nominee with a similar ideology who might vote on issues in a way that supports the administration. During the process of “advice and consent” outlined in the Constitution, Senate confirmation hearings take place in order to question a nominee on his or her political and social affiliations, and on past verdicts. Justices have lifetime appointments, serving on the Court until they retire, resign, or pass away.

The Court receives thousands of petitions, or “writs of certiorari,” each year, and the Justices review each one before agreeing on about 80-100 cases to focus on in the upcoming term. A new term begins on the first Monday in October and closes in June of the following year.

Supreme Court proceedings aren’t conducted in a trial setting, nor do they happen in a closed hearing. Each case is tried by all nine Justices unless there is an illness, a recusal, or a vacancy while a new Justice is being chosen. A majority vote is necessary to make a ruling. Attorneys for both the petitioner and the respondent each file briefs with the Court, outlining their dispute or what they believe the decision of the lower court was mistaken about. 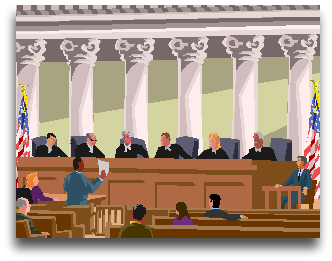 Next, each side has the opportunity to explain their views to the Justices, to answer questions, and to respond to the opposition. The Justices then go into conference and take a vote. If there are an even number of Justices voting and there happens to be a tie, then the decision of the lower court is upheld. Otherwise, they rule on the case and then each one writes an opinion, either agreeing with the majority ruling, opposing the majority ruling, or concurring with it for his or her own reasons.