The Myth of Castor and Pollux

The mythical twins in the constellation Gemini were actually half-brothers; Castor’s father was the King of Sparta, while Pollux was fathered by Zeus, the King of the Gods. 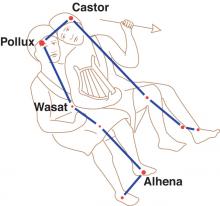 Growing up, the inseparable brothers developed volatile personalities and continuously tested each other’s strength. Castor became a warrior and Pollux a boxer, and the two men joined Jason and the Argonauts on the quest for the golden fleece of Aries the Ram.

As the story goes, the twins started a feud with fellow crew members on the Argo. Castor, the mortal twin, was a fierce warrior but that day he was overpowered and killed. His immortal brother was enraged and avenged his brother’s death.

Pollux implored his father, Zeus, not to separate them. Zeus created the constellation of the twins, holding hands and spinning across the night sky for all eternity.

Twin Stars in the Night Sky

Though, according to mythology, Castor and Pollux are reputed to be “twins,” in reality these star systems are light years away from each other and are complete opposites from an evolutionary perspective.

Pollux is an individual star, 724 million years old, an orange giant that has burned through its hydrogen core and is expanding. Pollux was identified as the beta star in the constellation Gemini, but when its absolute magnitude was calculated it proved to be brighter than the alpha, Castor. The two stars are twenty light years away from each other; Castor is farthest from earth at 51 light years while Pollux is 34 light years away. In recent years, an exoplanet was found orbiting Pollux.

Castor has a more complicated history. With technological advances in the science of astronomy through the centuries, information about the alpha star has continually changed. With the use of refracting telescopes in the seventeenth century, Castor was identified as a binary star. Then, in the 1800’s the contrasting spectral lines of distant stars could be measured and astronomers observed that Castor’s two stars were each being orbited by a companion star, making it a quadruple star system.

Just within the past quarter century, the phenomenon of eclipsing binaries was discovered, where a smaller star is identified as it crosses the path of the larger star, causing its light to flicker. Another pair of cool red dwarf stars were found, making Castor a rare grouping of three sets of binary star systems.