Electricity is the activity of electrons. They’re found orbiting the nucleus of an atom and they’re one of the smallest particles in the known universe.

An atom with an equal number of protons and electrons is said to have a neutral charge, while an excess of electrons means the atom has a negative charge. When atoms of some types of elements are “off balance” in this way they’re called ions. Ions conduct electricity because an electric current can only occur when there is a loss and then a gain of electrons.

Though electricity is referred to as a “current’, electrons don’t really flow like a stream of water. Instead, they individually “jump” from one atom to an adjacent atom practically at the speed of light.

Since matter cannot be created or destroyed, what is the process for generating electricity?

To create an electrical current, there has to be a way to set electrons into motion. Large magnetic turbines, powered by water pressure, coal, gas, or nuclear energy, spin around a coil of copper wire. When magnetic forces are applied to the metal wire, the electrons are displaced, causing them to jump from one atom to another. This creates an electrical current. This current can be generated within a power station, transmitted through transformers and along power lines, into our homes and businesses.

Harnessing the power of electrons is possible by varying the components it’s channeled through. A conductor, such as a metal wire, allows it’s electrons to be easily displaced so an electric current flows through it quickly. An insulator performs the opposite task by blocking the flow of current where it isn’t needed or could result in injury. A resistor can be used to slow the current of electricity, lowering its voltage.

The units used to quantify electricity are named after the 18th-century scientists who first observed the electromagnetic reactions of positive and negative charges...

The measure of the speed of an electric current is the Ampere, or amp, and is equivalent to 1 Coulomb/second.

Resistance is the interference an electric current encounters as it’s moving through a metal wire, and is measured in Ohms.

The opposite of resistance is conductance, measured in Siemens. Siemens is equivalent to 1/ohms.

Voltage is a measure of the “thrust” being placed on electrons. A higher voltage causes a current to travel faster and farther.

The Watt is a measure of the total power of an electric current. Watt is equal to volts x amps.

AC or DC? Power to the People

Electricity can be portable, for example, the direct current produced by the batteries that power our cell phones, laptops, and television remotes, or else generated on a much larger scale by power plants transmitting alternating current into our homes and businesses.

During the late 1880’s, the first coal-fueled power plants were built in New York City to generate electricity, about 110 volts that could travel just a mile or two along power lines connected to only 50-60 customers. Thomas Edison believed that a source of direct current traveling outward from a power plant at relatively low voltages was a safe and reliable way for Americans to light up his newly invented light bulb.

But others disagreed. The problem with Edison’s design was that only a small amount of electricity could travel a short distance before heat loss within the power lines caused the current to dissipate. 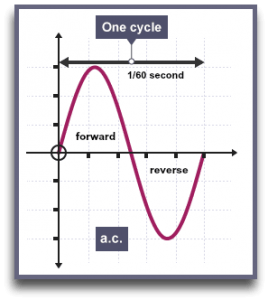 The challenge to Edison’s direct current was Nikola Tesla’s invention of AC power. Tesla demonstrated the usefulness of creating a stream of electrons that produced a current by continually changing direction rather than traveling in a straight line.

A safe and efficient way to distribute AC power was a challenge as well. Nicola Tesla had to devise a way to make electricity accessible to a larger number of customers at a greater distance from where the power was being generated.

The friction that was causing heat loss within the power lines was proportional to the amount of current flowing through them; the larger the current, the more heat was lost. And since an increase in current required a higher number of volts to power it through the lines, there needed to be a way to increase both voltage and current while safely controlling the amount of electricity being delivered to the customer.

With the invention of the transformer in the mid-1880’s, a large amount of current could be generated at extremely high voltages and delivered to transformers located on the power lines. This is the process in use today. Within the transformer, the voltage is lowered from thousands of volts down to the 120 volts that safely powers our homes.