In the 1780’s, the US Constitution was being drafted to create a government with three co-equal branches; the Legislative, the Executive, and the Judicial. The framers determined that each branch of the U.S. Government should have it’s own exclusive powers, and through a process of “checks and balances,” the authority to influence the other two. The purpose of this was to maintain a balance of power and to ensure that the government would be representing the collective will of the American people.

Article II of the Constitution outlines the powers of the Executive branch and the process of electing a President and a Vice President to office. The controversy in the beginning was about whether a direct “one-person, one-vote” majority among the American people should decide the winning candidate or if Congress should make the determination; the logic being that congressmen were elected in a public election and therefore were entrusted to represent the will of their constituents. The men knew it was vital to create a process that was democratic, but also one that was civilized and free of “tumult and disorder,” ensuring that the ones entrusted to elect a candidate to the highest office of the land would “possess the information and discernment requisite to such a complicated task.”

“Each State shall appoint, in such Manner as the Legislature thereof may direct, a Number of Electors, equal to the whole Number of Senators and Representatives to which the State may be entitled in the Congress”

Section III of Article II provides for the selection of a group of “electors” within each of the 50 states and the District of Columbia. What eventually became known as the Electoral College is the process in effect today for electing a President and a Vice President to office.

The number of electors, or the number of votes, allotted to each state is equal to that state’s representation in Congress; two plus their number of representatives in the House. There are a total of 538 electors (100 + 435 + 3 in DC) with a majority of 270 needed to win the election. Each candidate running for office has his/her own separate group of electors, usually individuals loyal to their political party who could be trusted to faithfully vote for their candidate if given the opportunity.

Though the winner of the election is usually announced within a day, the electors formally place their votes in December. The votes are counted and read aloud in a Joint Session of Congress in the first week of January. The new President and Vice President are inaugurated and officially take office at noon on January 20.

The Electoral College process has it’s critics and many have argued for reform. The most persuasive of the criticisms is that it is possible for a candidate to be awarded the most electoral votes while not winning the majority of popular votes. This occurred in 1876, 1888 and recently in 2000 and 2016. Also, some have observed that candidates tend to focus their campaigning on a small number of competitive “swing states” where the ratio of Democrats to Republicans is near equal and a win in that state could decide the election. 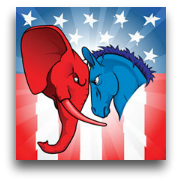 Proponents, though, argue that the Electoral College increases the voting power of smaller states and states with more rural populations. Candidates have to campaign across a wider geographical area instead of just trying to win the popular vote by campaigning in large cities and populated regions of the country.

Why Do We Vote on the First Tuesday in November?

According to History.com, voting on the first Tuesday in November (or, the Tuesday after the first Monday of November) is a tradition that began in the 1800’s when most Americans were farmers who planted in the spring, harvested in the fall, and couldn’t travel much during the cold stretch of winter. In the month of November, the farm work was completed and it was time to bring the crops to market. Since families attended church on Sunday and most farmers traveled a day or longer to reach the nearest town, market day was usually on Wednesday.

Election day was set for the first Tuesday in November so that even the hardest working Americans could make it to the polls.