Sagittarius is one of the oldest Zodiac constellations. Roman astronomers envisioned that its collection of stars represented a Centaur, a skilled huntsman with the head and torso of a man and the legs of a horse. The brightest star, Gamma Sagittarii, is the tip of the hunter’s arrow that points directly west at the star Antares, the maroon “heart” of the scorpion.

Practical minded Chinese astronomers located the stars of Sagittarius in the seventh and eighth lunar mansions and interpreted their shapes to represent objects from everyday life. Gamma Sagittarii is known as “Ji” in the Blue Dragon of the East quadrant. Ji represented a winnowing basket that was used to dry rice and scatter the chaff in the winds at harvest time. The lamda, phi, sigma, tau, and zeta stars of Sagittarius are in the Black Tortoise of the North quadrant, forming a dish that represented life or sustenance.

Within Sagittarius is the galactic center of the Milky Way galaxy, the super-massive black hole known as “Sagittarius A.” Most spiral galaxies are orbiting black holes that were created as a dying star imploded into a point of darkness so massively heavy that not even a photon of light could escape. 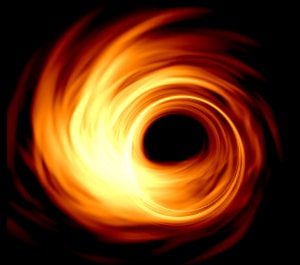 In April 2019, scientists revealed project Event Horizon Telescope, announcing that they’ve finally produced an image of the black hole that our galaxy is orbiting. They couldn’t simply take a picture of it because it’s really far away and there are billions of other stars, planets, comets, and clouds of stellar dust in the way. Instead, “it’s an achievement that took supercomputers, eight telescopes stationed on five continents, hundreds of researchers, and vast amounts of data to accomplish.”

Sagittarius A is 26,000 light years from our solar system. Though it appears that the region surrounding Sagittarius A is characterized by a spiral of matter being pulled down into its core, the danger of the Milky Way galaxy getting sucked into Sagittarius A, like water swirling down a drain, isn’t realistic. It takes the solar system 225 million years to complete just one orbit around the galactic core. It would take an incalculable number of years for the solar system to orbit close enough to be in danger.