The search for life in other parts of the universe has resulted in the discovery of over 2,000 possible “earth-like” planets that scientists are just beginning to explore. Within our solar system, the question of whether the other terrestrial planets ever harbored life or could be habitable in the future is the driving force behind our exploration of Mars.

The four terrestrial planets formed from the heavier elements of metal and rock while the gas giants settled into orbit farther way in the colder regions of the solar system. So far, Earth is the only planet that we know of with an environment in which the molecular “ingredients” necessary for living organisms to evolve could take hold; we need water, oxygen, a temperate climate, and protection from solar radiation.

Mars and Earth have in common an iron core surrounded by a layer of molten rock that erupted at the surface for millions of years. As Earth’s core rotates, it creates an electric current that flows through metals in the mantle and crust, forming a protective magnetic field that extends approximately 65,000 miles (40,000 km) above the planet. Scientists believe that Mars similarly had a magnetosphere in the past but doesn’t any longer.

If water – and microbial life – once existed on Mars, that means that at some time in the past it’s magnetosphere was strong enough to support an atmosphere

They’re hoping that by analyzing the soil of the red planet they’ll find the telltale “biosignatures” of bacteria that once thrived in a watery environment, or possibly even microscopic fossils of the bacteria themselves.

The terrestrial planets are composed of three types of rock: igneous, sedimentary, and metamorphic. They differ in the elements they’re made of and the process by which they were formed.

Igneous rock, for instance, contains high amounts of the elements silicon and oxygen (silica is classified as a “metalloid”; both a metal and a non-metal) and forms when molten lava cools and crystalizes. Igneous rock makes up approximately 15% of the earth’s crust above sea level and a major portion of the oceanic crust. An example of igneous rock is basalt; the type of rock predominately found on Mars.

Sedimentary rock is formed when minerals and the detritus of plants and animals are pressurized over time and become compacted into flat layers. This is the portion of the earth’s crust where oil and natural gas is found and also where fossils dating back millions of years are preserved.

Metamorphic rock results from igneous and sedimentary rock that has been modified at a molecular level by heat and/or pressure. This occurs deep within the earth, so metamorphic rock is found in regions where plate tectonics have formed both mountains and valleys. Examples of this type of rock are slate and marble.

Mars is mostly known for the covering of iron oxide that gives the “red planet” it’s crimson color and causes dust storms to sweep across its surface. From past missions we also know that the subsurface rocks are igneous basalt, resulting from volcanic activity millions of years ago. 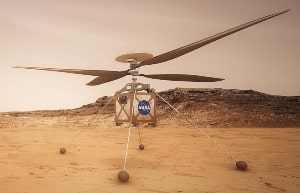 The goal of Perseverance is to study the rocks and soil on Mars in much greater detail and with cutting edge technology. Cameras, spectrometers, and ground penetrating radar will identify the precise minerals found in the soil and continue to search for organic compounds. Perseverance has the capability to drill and extract core samples that will be brought back to earth in a later mission.

The battery-powered Ingenuity drone will fly through the thin atmosphere on Mars at a height of about 30 feet (10 meters). It will take images of the surrounding landscape, identifying obstacles for Perseverance to avoid and mapping a travel route to exit the crater.

The journey to Mars will take about 7 months, so Perseverance, with Ingenuity hitching a ride, is scheduled to arrive in February 2021.