Jupiter is the largest planet in the solar system and one of the most interesting to view. Its distance from the sun means that temperatures in the atmosphere of this “gas giant” are extremely cold. But heat from deep within Jupiter rises through layers of hydrogen and helium, resulting in temperature fluctuations that cause massive storms to rage at wind speeds of 300-800 kph.

From north to south, the ever-changing surface of Jupiter appears divided as these storms swirl within “belts” and “zones” parallel to the equator. Lightening within the storms could indicate regions of water vapor which then give way to an atmosphere much like that of the Sun; about 80% hydrogen, 15% helium, and a small mix of other elements. The “great red spot” is a cyclonic storm that has been a feature on the southwest hemisphere of Jupiter for possibly hundreds of years.

Frozen gases in the upper atmosphere reflect the light of the sun, causing Jupiter to be the second brightest planet visible from earth. A day on Jupiter is the briefest of any other planet in the solar system. Jupiter rotates on its axis in only 10 hours, and orbits the sun in 12 years from an average distance of 780 million kilometers.

Within Jupiter’s stormy atmosphere, gaseous elements like hydrogen and helium gradually increase in pressure before reaching a critical density when they become metallic.

The layer of metallic hydrogen has created a magnetosphere around Jupiter that is not only stronger than earth’s, it surrounds the four “Galilean” moons of Jupiter and protects them from the atmospheric vacuum within the solar system. 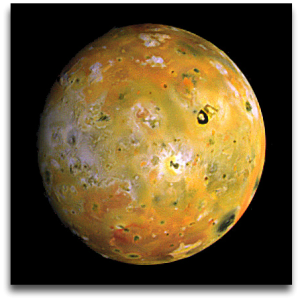 is the closest. The gravitational effects from its proximity to Jupiter, as well as its orbital resonances with Ganymede and Callisto, causes a “push and pull” effect that creates friction within Io’s core. As a result, there are hundreds of volcanoes spewing sulfur dioxide into the moon’s thin atmosphere, causing it to appear yellow, green, and orange. 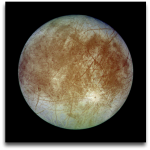 is just a little smaller than Earth’s moon. It is believed to have a terrestrial surface covered with oceans locked under solid ice. Lines on the surface of the ice could be caused by gravitational pressures related to its proximity to Jupiter and the other moons, or might be the result of geologic activity beneath the surface. 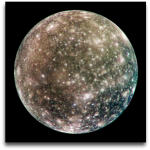 Callisto, on the other hand, is farthest away and much colder. Callisto is the same size as Mercury, but much lighter since its core is believed to be rock rather than metal. Its thin, carbon-dioxide atmosphere isn’t as sheltered from the solar winds as the other three moons. The ancient, cratered surface of Callisto is geologically stable, and scientists theorize that it could be a likely place to build a human settlement during an age when space exploration takes us to the outer boundaries of the solar system.