History of the Zodiac Constellations

A Brief History of the Constellations

Tablets made of hardened clay and a small reed with a sharpened tip were the writing instruments of the Sumerians living on the Tigris and Euphrates rivers more than five thousand years ago. What started as a means of counting currency evolved into a sophisticated form of communication that was passed on to the Babylonians and eventually became the language of the oldest known star maps.

Cuneiform symbols representing the positions of the stars, the rising and setting of the visible planets, and the timing of the solstice and equinox were pressed into soft clay and then set in the sun to dry. When the reproduction was complete, it was placed in a kiln where the heat would cause it to dry and harden.

Which Civilization Created the Zodiac Constellations?

With Alexander the Great’s invasion of Asia Minor and Persia in the middle of the third century BCE, cultural influences including religion, art, and astronomy were being shared among civilizations that, prior to that time, were isolated and at war with each other. The Sumerians and Babylonians, described as the “cradle of civilization,” were the first to divide the ecliptic into twelve regions, identifying the constellations as farmers and soldiers, as well as the lions and scorpions that inhabited the landscape in that part of the world. For the first time, these star maps and folklore might have been transported east from the region of modern-day Iraq toward Egypt.

From that point, historians believe that a convergence of Egyptian and Greek astronomy happened when a young student named Eudoxus, educated in Athens during the time of Socrates, Aristotle, and Plato, traveled to Egypt. Eudoxus is said to have worked in Egypt for years, gathering information and furthering his studies in mathematics and astronomy. 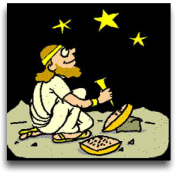 A century later, the king of Macedonia hired a philosopher named Aratus to decipher the work of Eudoxus. Aratus created the poem ‘Phaenomena’ which described the rising and setting of the twelve Zodiac constellations, as well as the pathway of the sun and the planets within the ecliptic.

Experts who have analyzed the writings have concluded that the position of the stars recorded by Eudoxus and then written about by Aratus was actually a representation of the night sky as it appeared sometime around 1000 – 2000 BCE. And the constellations the men identified were ones that were visible from the region near the Tigris and Euphrates Rivers. In other words, the positions of the Zodiac constellations had to have originated with the Sumerians and Babylonians, and then later adapted by the Romans to include the infamous stories of loyalty and betrayal among their gods, goddesses, and legendary heroes.

The Lascaux Caves in the south of France are home to some of the oldest known cave paintings of the night sky, incorporating what could be some familiar star clusters that would have been visible 17,000 years ago.

Images of elk, bison, and birds were painted with mineral-based compounds during the Paleolithic era. Iron deposits in the earth yielded red and yellow ochre that could be lightened or darkened with charcoal and pulverized bone and then mixed with spit, urine, or animal fat to create a substance that would bind with the cave walls.

A group of teenage boys exploring the countryside discovered the caves in the 1940’s. The paintings are carefully protected from the humid weather, and a nearby gallery contains precise reproductions.

When Ptolemy, a Greek scholar living in Egypt, created the Almagest in 150 CE, his star maps represented the latest and most factual information about the night sky seen from the region of the world 30 degrees north of the equator. Ptolemy identified 48 constellations and over 1,000 individual stars located within their boundaries.

His work was translated into Arabic about 900 years later, when the astronomer Al-Sufi wrote the Book of the Fixed Stars, and for the first time attempted to rank the stars by their luminosity.

Another 570 years passed before astronomers took to the seas, navigating the oceans farther north and south than ever before. In the 1500’s, Casper Vogel, Tycho Brahe, and Johann Bayer, among others, explored the circumpolar stars and established new constellations, as well as a system of naming celestial objects using a letter of the Greek alphabet with the Latin name of the constellation the star was located in.

The Bayer designations for the 1,500+ stars discovered prior to the seventeenth century are still in use today.

The Modern Era of Astronomy

In 1919, the International Astronomical Union was created to consolidate the efforts of smaller international groups working to further the science of astronomy. There are over 12,000 individual members and 74 scientific communities affiliated with the organization. In addition to education and research, the IAU gets to determine the names of any newly discovered stars and planets, as well as planetary features such as craters, plains, volcanoes, peaks, and canals.

The IAU has established 88 constellations and the precise boundaries within which every astronomical object can be located and researched. These include Ptolemy’s 48 and others discovered by explorers in the seventeenth and eighteenth centuries.