Our brain controls everything about us. It influences our growth, coordinates movement, and makes us conscious of the world around us. In other words, our brain makes us human. Being human means that we have emotions, self-awareness, and memories. We have the power to interact with our environment and with each other. We can set goals and learn how to achieve them, finding new and inventive ways to make our lives better.

Deep within the brain are structures that regulate all the systems of the body; regions that control involuntary functions such as heartbeat and respiration, as well as glands releasing enzymes that travel through the bloodstream to every muscle and organ in the body.

Parts of the Brain

The brain weighs in at approximately three pounds. Situated on top of the spinal column, the brain sends and receives information through 31 pairs of spinal nerves. The brain, spinal cord, and this network of nerves make up the central and peripheral nervous systems.

The three main structures of the brain are the cerebrum, the cerebellum, and the brainstem.

The largest part of the brain is the cerebrum. The symmetrical right and left hemispheres are each divided into four lobes: the frontal, parietal, temporal, and occipital lobe.

The frontal lobe of the cerebrum continues to grow and develop until we’re in our late 20’s.

Our capacity to make decisions, to access memories that shape our perception of the environment, and to use language to express ourselves is a result of activity within the frontal lobes.

The temporal lobe processes sound and interprets the context and meaning of language.

Long-term memories associated with language and visual information, remembering names and dates, for instance, are stored in this part of the cerebral cortex.

The parietal lobes process language and contain the somatosensory cortex that controls the ability to interpret sensory information in regards to touch and vision.

Being able to navigate spatially within the environment is a function of the parietal lobes.

As sensory input from the eyes is put into context within the occipital lobe, that information is transmitted to the parts of the brain that control movement so a person can quickly react to what’s happening around them.

The brain connects to the spinal cord by the brainstem, made up of the midbrain, the pons, and the medulla oblongata. These structures relay sensory signals to and from the environment, controlling vision, hearing, movement, and the sleep/wake cycle. They also work together to regulate body temperature, heartbeat, and respiration.

The cerebellum is located beneath the cerebrum, next to the brainstem. Similar to the cerebrum, it has two identical hemispheres, and it’s accordion-like outer layers are gray matter surrounding a core of white matter. The cerebellum’s main function seems to be to coordinate motor functions. Billions of neurons within the cerebellum receive sensory information related to movement from the frontal lobe of the brain, “fine-tuning” these sensory signals and relaying them outward through the spinal nerves to the peripheral nervous system.

The brain and the spinal cord work together to form the central nervous system. The spinal cord is approximately 15-18 inches long and ¾” in diameter. It begins at the brainstem, extends downward to the lower back, and is made of the same types of cells as the brain, bundles of neurons and their protective glial cells. 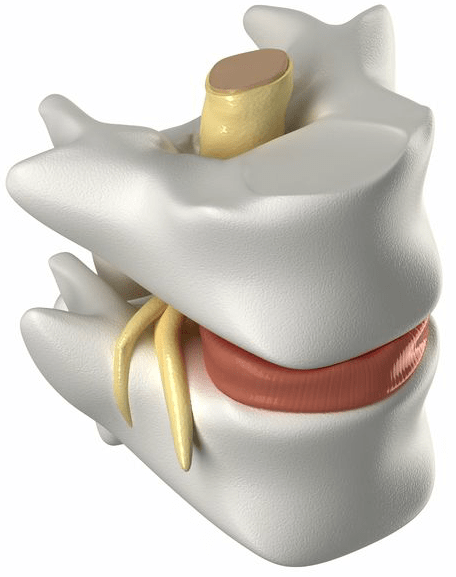 The spinal cord is protected by the bones of the spinal vertebrae and by the meninges, three-layers of membranes within which is the cerebral spinal fluid that is formed in the vesicles of the brain.

Along the length of the spinal cord, between the bones of the vertebrae, are 31 pairs of spinal nerves that connect the central nervous system to the peripheral nerves. Two types of nerves, the motor nerves that connect to the muscles to control movement, and the sensory nerves that transmit sensory information back to the brain are located on each side of the spinal cord. They converge into a single spinal nerve that branches off to the peripheral nerves of the arms and legs.

Brain and spinal tissue are made up of two types of nerve cells, neurons that transmit information using chemical and electrical signals, and the surrounding glial cells that provide nutrients and protection for the neurons.

During early childhood, billions of neurons are formed within the brain from neural stem cells. The largest part of a neuron is the soma, the body of the cell containing a DNA-filled nucleus and other cellular structures such as mitochondria and lysosomes. Instead of a cell wall, however, the soma is surrounded by spikes called dendrites that branch off and connect to other neurons, forming neural networks. The axon is a larger thread-like structure that extends away from the soma to connect with other neurons at a synapse. A neuron receives information through the dendrites and sends information along the axon.

Communication between neurons could be electrical, conducted through ion channels in the cell membrane, or chemical, in the form of neurotransmitters that travel across the synapse.

The other type of brain cells are the glial cells that surround the neurons, producing myelin and providing nutrients and protection from pathogens such as viruses and bacteria.