Saul of Tarsus, also known by his Roman name, Paul, was born in the modern-day region of southern Turkey in about the year 5 CE.

Paul was a Pharisee, belonging to an educated merchant class that often clashed with the Sadducees, the sect of Jewish priests and aristocrats with social connections to the Romans. He learned the tent-making trade of his family, and as a youth he was sent to Jerusalem to study Jewish law according to the original text of the Hebrew bible.

He was a citizen of Rome, proud of his Jewish heritage and of the status of his wealthy family. Around 30 CE, Paul began to hear rumors about John the Baptist and eventually about Jesus, preaching and performing healing miracles in villages located on the eastern shore of the Mediterranean Sea.

As a boy, Jesus of Nazareth often questioned the Rabbis about the laws and traditions of his Jewish faith. Eventually, he began to talk about his own beliefs, that the true relationship between God and man wasn’t governed by strict adherence to law but was instead centered on love, humility, and forgiveness; ideas that contradicted the writings of the Hebrew Bible

In contrast to the thundering, omnipotent God of the Jewish people, Jesus compared God to a loving father or to a shepherd carefully protecting his flocks of sheep. His teachings were misunderstood and he was condemned for blasphemy. Jesus was arrested by Roman soldiers and crucified in 34 CE.

By his own admission, Paul fervently persecuted Christians. He was standing in a nearby crowd as St. Stephen, the first Christian martyr, was stoned to death in the streets of Jerusalem.

Soon after, Paul was journeying to Damascus, reportedly to apprehend Christians and return them to Jerusalem to stand trial. In the Book of Acts, Luke writes about Paul’s sudden conversion to Christianity; that the spirit of the resurrected Jesus appeared before Paul and asked him why he was persecuting Him. Paul was struck blind for three days, during which time he fasted and prayed continually. 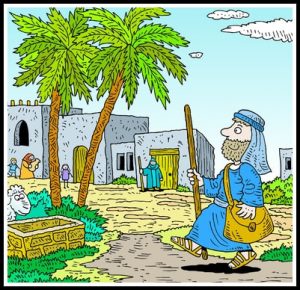 When Paul’s sight was restored, he began to tell others about his premonition. Those who knew Paul couldn’t believe what he was saying. He seemed to be contradicting his own deeply held Jewish beliefs to praise the God of the Christians.

Paul was shunned, threatened, and arrested, yet during the last 20 years of his life he completed three missionary journeys. As he traveled through modern-day Europe, he established new Christian churches and encouraged people from every level of society to accept each other’s differences and to worship God in a spirit of love and humility.

Paul’s missionary work influenced the emerging religion of Christianity in inestimable ways. At that time, there wasn’t a New Testament bible for Christians to study. The only source of Jesus’ teachings were the first-hand accounts of the Apostles and the other disciples who had known Jesus and had survived persecution to tell others.

Paul is credited for much of the New Testament writings. Scholars agree that he authored the book of Romans, and that 13 of the epistles were letters that he personally wrote, or that were written in his name, to newly established Christian churches. In the Acts of the Apostles, Luke records much about Paul’s travels, and the book concludes as Paul is  awaiting trial in Rome.

According to history, Paul spent his final years suffering from the cold and discomfort of prison. He prayed faithfully and preached unrelentingly about Christianity. In 68 CE, he was executed. Scholars believe that he was probably beheaded in Rome under the rule of Emperor Nero, after the Great Fire of Rome and shortly before the suicide of Nero, himself.

Though Christians were persecuted in the first century, by the third century Christianity was the official religion of Rome. A sarcophagus containing the remains of St. Paul were unearthed from beneath the Basilica of St. Paul’s Outside-the-Walls (Basilica Papale San Paolo fuori le Mura) in 2002. Though it hasn’t yet been opened, it was authenticated as the tomb of St. Paul as it was encased within a layer of earth dating back to 390 CE. An inscription on a nearby marble tombstone reads: “Paulo Apostolo Mart.”