In the twelveth century, the man history would come to know as Saint Francis was born Giovanni di Pietro di Bernardone in Assisi, Italy.

His father had just returned home from a journey to France, and he immediately rechristened his new-born son “Francesco” after the country where his business had recently prospered. Francis was raised to be a cloth merchant like his father. He was educated, served in the military, and as a typical youth he lacked self-discipline and rebelled against his overbearing father.

In his 20’s, Francis searched for his own identity and often retreated into the forest to pray. He felt called by God to rebuild a crumbling church in the countryside near Assisi. When he stole cloth from his father to purchase stone and tools, he was taken to court to be reprimanded. Instead of agreeing to repay his father, Francis denounced his family and vowed to help the poor by living in poverty himself and preaching about Jesus. 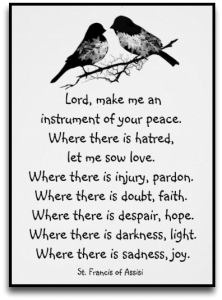 Francis lived a humble, frugal existence yet he was filled with joy. He was drawn to the natural world and was said to have an overwhelming compassion for all living things. On his travels through the Italian countryside, he sought to help others and to follow in the footsteps of Jesus.

In 1209, Pope Innocent III allowed Francis and his followers to establish the Franciscan Order within the Roman Catholic Church.

After years of selflessly living in extreme poverty, Francis’ physical and mental health began to deteriorate. He died at age 45 and his remains are interred at the Basilica of Saint Francis in Assisi.

When a new Pope is elected, he immediately appears on the balcony of St. Peter’s Basilica and is introduced to the world by his papal name. The name each Pope chooses is an indication of a historical figure he most admires or the role he envisions for himself in the Church.

Jorge Mario Bergoglio was elected the 266th Pope on March 13, 2013. He is the first Pope Francis in history. Known for his humility and compassion, He is the only Pope in recent years to surrender the wealth and power of the Vatican in order to dedicate himself to lifting others out of spiritual poverty.