We're being told it's working! Keeping our “social distance” from each other helped limit the spread of coronavirus. Haven't had it yet? A vaccine could be ready before the next flu season.

The protein controversy is usually about the difference between animal-based and plant-based sources. Is one or the other healthier? According to Healthline.com, it’s a matter of choice and there is evidence in favor of both

Home Away From Home

NASA is setting its sights on the Moon in the 2020’s. The Artemis Program (Apollo’s twin sister) will send men and women into space to set up an outpost on the lunar surface and begin testing new equipment and technologies that could pave the way to Mars in the 2030’s

High blood pressure, also known as hypertension, often has no symptoms, yet it could weaken the arteries of the circulatory system and cause damage to the heart, brain, and kidneys over a span of many years ...

The earth’s location within the Solar System is a precarious balance of danger vs necessity. Too much sun exposure can cause eye and skin damage, yet we need sunlight in order to produce healthy amounts of vitamin D ...

The story of Jesus’ birth is one of the most familiar in the world. Read Instride about the beginning of Christianity and when to celebrate the "12 days of Christmas" this year.

A year ago, we were just beginning to hear the news that a “novel” coronavirus was making it’s way across the globe.

After a year of social distancing a vaccine is in the works, but in the meantime the 2020 holiday season is underway. Health experts are advising that we find new and creative ways to celebrate in order to protect ourselves and our loved ones from COVID-19.

The finance website deluxe.com has a list of safe and healthy entertainment trends that make it possible to celebrate together while being safely “socially distanced.”

Visit a museum, theme park, or aquarium, from the comfort of your home.

Download an app for audio/video connections and watch the same programs together from anywhere in the world.

Purchase tickets for current and upcoming concerts on Billboard, Songkick, and Vulture, or find free shows on Youtube such as One World Together at Home featuring Paul McCartney and Lady GaGa.

Professional instructors provide free online workouts such as HIIT, yoga, and fitness dance that you can do comfortably and safely from home.

The Torah tells the stories of the Hebrew people, the prophets and their descendants that received God’s laws and traveled to the “promised land” of modern-day Israel.

The Torah was written in the Hebrew language, and Hebrew was spoken by the Israelites for centuries, eventually being replaced by Aramaic when Jerusalem was conquered by the Babylonians in 587 BCE.

Dr. Jack Fellman, writing for JewishVirtualLibrary.org, explains that in the 18th century, the Jewish Enlightenment resulted in a revival of many of the ancient traditions of Judaism. At that time, Hebrew was only being taught in synagogues in order to study the original text of the Hebrew Bible.

A Jewish scholar named Eliezer Ben-Yehuda (1858-1922) worked to bring the ancient Hebrew language into the twentieth century, and today it’s one of two official languages spoken within Jewish communities in Israel and around the world.

Your Place in the Universe

If you’ve ever – just for fun – read your horoscope to find out what the universe has in store for you, don’t forget that the signs of the Zodiac are real constellations in the night sky. Astrology and Astronomy are very different things, but within the boundaries set by the International Astronomical Union, are the luminous stars, star clusters, galaxies and planetary nebulae that astrologers believe are connected to the month you were born.

Within Sagittarius is the galactic center of the Milky Way galaxy, the super-massive black hole known as “Sagittarius A*.” Most spiral galaxies are orbiting a black hole. Black holes form when a star burns out and implodes into a point of darkness so massively heavy that not even a photon of light could escape. 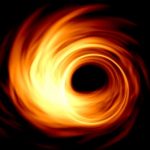 In April 2019, scientists at EHT announced that they’ve finally produced an image of the black hole that our galaxy is orbiting. They couldn’t simply take a picture of it because it’s really far away and there are billions of other stars, planets, comets, and clouds of stellar dust in the way. Instead, “it’s an achievement that took supercomputers, eight telescopes stationed on five continents, hundreds of researchers, and vast amounts of data to accomplish.”

Sagittarius A* is 26,000 light years from our solar system. Though it appears that the region surrounding Sagittarius A* is characterized by a spiral of matter being pulled down into its core, the danger of the Milky Way galaxy getting sucked into Sagittarius A* – like water swirling down a drain – isn’t realistic. It takes the solar system 225 million years to complete just one orbit around the galactic core. It would take probaby trillions of years for the solar system to orbit close enough to be in danger.

The Trifid Nebula appears divided into thirds by thread-like streams of dust. It’s one of the youngest known emission nebulae and one of the closest star fields to earth

The Lagoon nebula and the Omega nebula, each about 5,000 light years from earth, were discovered as far back as the seventeenth century

According to Ian Ridpath’s  Star Tales, Sagittarius is one of the oldest Zodiac constellations. Roman astronomers envisioned that its collection of stars represented a Centaur, a skilled huntsman with the head and torso of a man and the legs of a horse. The brightest star, Gamma Sagittarii, is the tip of the hunter’s arrow that points directly west at the star Antares, the maroon “heart” of the scorpion.

Practical minded Chinese astronomers located the stars of Sagittarius in the seventh and eighth lunar mansions and interpreted their shapes to represent objects from everyday life. Gamma Sagittarii is known as “Ji” in the Blue Dragon of the East quadrant. Ji represented a winnowing basket that was used to dry rice and scatter the chaff in the winds at harvest time. The lamda, phi, sigma, tau, and zeta stars of Sagittarius are in the Black Tortoise of the North quadrant, forming a dish that represented life or sustenance.